It is much simpler. Half of the circle represents the northern hemisphere of the globe where ATU originated, ie North America and Europe. In the semi-circle, 3 letters are written: A, T and U. The main support of the whole organization is the letter T because ATU is based on trade.

Steam achievements in Java(libgdx). Step by step for dummies.

Steam achievements in Java(libgdx). Step by step for dummies. In this tutorial I will present in a rather comprehensive way the implementation of Steam's achievements in Java. I used the libgdx framework, but the tutorial should apply regardless of the technology used, if it is java. The tutorial was tested only for a desktop game (Windows). I must also mention that I tested adding achievements on a game that had been already released, but the same procedure should also apply to a game in a beta  state . In addition, I used Eclipse and the standard structure of  projects for libgdx, i.e. 3 projects for desktop, core and android (which contains the assets folder). 1. Steam achievements Achievements are a Steam's service that allows you to extend the functionality of our game. It's something to strive to "achieve". Instead of doing the main campaign you can also attempt to get the achievements which add to your game completion on your steam profile
Czytaj więcej 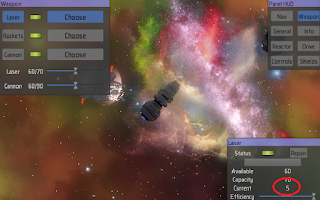 Just like the Cannon, the Laser needs time to load the energy needed to fire the shot. The loading speed depends on the class of the ship. The system does not require the laser buffer to be fully charged to deliver the shot. Just 50% of the buffer is required. Below this level, the system does not allow you to shoot. The laser does not transmit full energy from the buffer in the laser beam. The amount of energy transferred to the enemy ship's shields or hull depends on the conversion parameter, which depends on the class of the ship. Generally, this is only about 10% of the buffer energy. Google Play https://play.google.com/store/apps/details?id=com.polinc.thecollapse.ss Amazon Store http://www.amazon.com/gp/product/B07889TCQT More at :  www.polinc.pl
Czytaj więcej